Buffalo News
January 22, I997
A State Supreme Court jury Tuesday ordered insurance carriers for an elderly Amherst woman to pay an elderly Orchard Park woman $500,000 for injuries she suffered in an Oct.7, 1994, two-car crash in the parking lot of the Eastern Hills Mall.
After a week-long trial before Justice Peter J. Notaro, a jury found _ , now 81, totally at fault for the accident that left _ , now 79, with a broken right arm and aggravated an arthritic hip condition that required her to get a hip replacement two months later, according to J. Michael Hayes and Norman J. Mattar, attorneys for Mrs. _
The attorneys said the accident occurred when Mrs. _ tried to cross a roadway in the mall parking lot without stopping or looking for oncoming traffic and she rammed into the passenger side of the car driven by Mrs. _ husband, now 77.
_, a retired West Falls auto repair shop owner, wasn’t injured in the accident but Mrs. _, a retired Roswell Park Cancer Institute nurse, is now confined to a local nursing home, the attorneys said.
Mrs. _ was charged with failure to yield the right of way, but her traffic case was reduced to a parking ticket, Hayes and Mattar said.

A Cheektowaga man agreed to a pretrial settlement that will pay at least $5.3 million for severe head and leg injuries he suffered when his car collided with a tractor-trailer two years ago, his attorneys said Tuesday.

_________ will receive monthly payments for the next 30 years totaling an additional 4.3 million, his attorney said.
_________ will continue to receive payments if he outlives the 30-year period, they added.

_________ has been unable to return to work on the assembly line of a Lancaster plant since the crash on Walden Avenue near Union Road, Cheektowaga, on July 29. 1983.

_________’s legs were broken and he suffered head and facial injuries when his auto ran into a scrap-metal rig pulling out of a steel warehouse lot.

The settlement will be paid by insurance carriers for Buffalo Fuel Corp. and SPC Enterprises Inc. Buffalo Fuel owned the rig, which was being driven by an SPC worker.

Attorney ___ said the suit claimed the SPC driver caused the accident by failing to yield the right-of-way to. 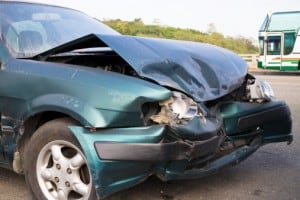 An Amherst construction worker has accepted a $450,000 partial insurance settlement in his continuing litigation over a workplace injury on Jan. 10, 1996.

_________ will get a check from insurance carriers for Seneca Industrial Associates for knee injuries suffered in a fall blamed on defective stairs at a loading dock area of Seneca Industrial Park. The injury made worse an existing knee problem and leaves him facing future surgery and arthritis, his attorneys said Monday.

The settlement offer, by insurance carriers for owners of the industrial park, in the700 block of Seneca Street, came just before jury selection was to begin before State Supreme Court Justice David J. Mahoney.

Hayes said the verdict came as a result of the jury’s interpretation of a state law under which a person who supplies alcohol to another person can be held responsible for the acts of that person.

_________ was thrown into the windshield of a car driven by _ of Miller Street, North Tonawanda after it skidded on icy pavement and hit a utility pole the night-of Dec. 29, 1987. The accident happened on River Road in the Town of Wheatfield.

She suffered paralysis of her right side from her injuries.

“Although he was only 17, he was able to purchase beer which he provided __________ and other youths there… he was (subsequently) found to have contributed to the intoxication of a minor and was thus responsible for the actions of the minor,” Hayes said.

Hayes said the jury initially awarded a total verdict of $2,086,000 but reduced it because the victim was not wearing a seat belt at the time. Wednesday’s verdict was delivered after three hours of deliberation.